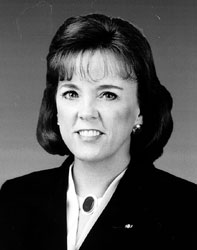 Argersinger became the first woman to head SIUC when she was hired as its 16th chancellor July 1, 1998.

She came to SIUC after a 15-year stint at the University of Maryland Baltimore County or UMBC, where she held various administrative posts, including a four-year term as provost. A native of Birmingham, Ala., she is a historian and an expert on 20th -century U.S. labor history. The author of several books, she earned three degrees in history, a bachelor’s at UMBC and master’s and doctoral degrees from George Washington University.

Among her goals as chancellor were forging new partnerships across campus and the region to enhance academics and research, to put more technology in the hands of students, faculty and staff and to refine allocation and planning to maximize resources.

She left her post in 1999 and joined the faculty in the University’s history department.