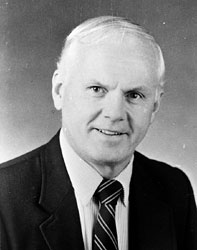 Guyon stepped in as acting chancellor in 1987 and seven months later, was chosen to fill the post permanently. By this time, SIUC encompassed nine colleges, a graduate school and medical and law schools.

A year after he took office, SIUC became the first U.S. university to open a campus in Japan. During his tenure, the campus added several new buildings, including Life Science III and what now is known as the Dunn-Richmond Economic Development Center, an incubator for small business and technology.

A native of Washington, Pa., he came to SIUC in 1974, first as dean of the College of Science and then worked his way up to become associate vice chancellor for research and dean of the Graduate School. Prior to joining SIUC, Guyon was at Memphis State University, where he served as professor and chair of the chemistry department from 1971 to 1974. Prior to that, he held the same jobs at the University of Missouri in Columbia.

He earned his doctoral degree in analytical chemistry from Purdue University, won several academic honors and initially worked in industry.