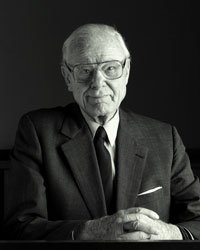 Lesar helped launch the University’s law school in 1972 and served as its dean and a professor. He twice stepped in to temporarily lead SIUC.

The first time, he did a nine-month stint between the administrations of Derge and Brandt, with the idea he would reassume his leadership role as law school dean once a permanent replacement was hired.

During that period, he was credited with smoothing out controversy and ill will in the wake of 104 faculty firings, spurred by “financial exigency.”

The second time, then-67-year-old Lesar — who faced mandatory retirement in 1980 — continued to oversee the law school and doubled as temporary chancellor while SIUC looked for a permanent replacement for Brandt, who resigned.

The SIU Board of Trustees named him a Distinguished Service Professor, making him the first faculty member to wear this honorary mantle.

He retired from the University in 1980.