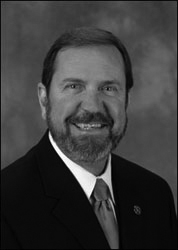 From 1996 to 2000, Treviño served as professor and chairman of the Department of Public Health and Preventive Medicine in the Texas College of Osteopathic Medicine, part of the University of North Texas Health Science Center.

From 1991 to 1993, Treviño served as dean of the School of Health Professions and professor of health administration at Southwest Texas State University. As dean, he was the chief academic officer of the nation's largest school of health professions, with 2,000 students majoring in one of 11 different health occupations.